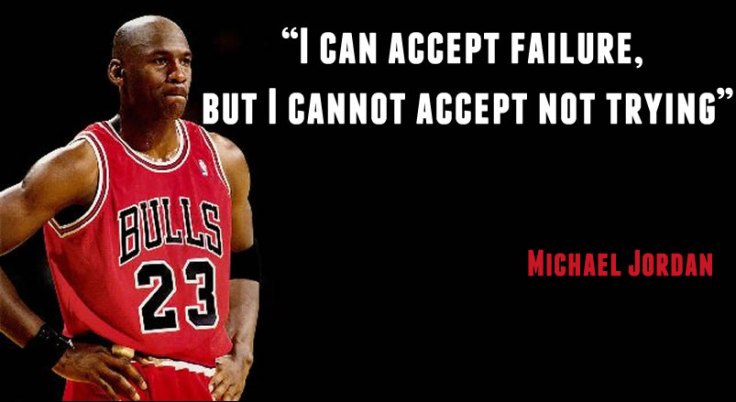 We all know that sumbitch that has a mentality like a statement you just read and I’m here to tell you that it’s total BS; I’m here to say “Go ahead, fail”.

Early on every sport teaches you that you will fail, and its gonna happen…a lot. I mean, hell the best hitters of all time we’re only successful 4 out of 10 at-bats. Michael Jordan lost basketball games, Ali was defeated in the boxing ring, and contrary to what you may think, Tom Brady has lost a Super Bowl. Seriously though, check out this quote from the great Mickey Mantle:

“During my 18 years, I came to bat almost 10,000 times. I struck out about 1,700 times and walked maybe 1,800 times. You figure a ballplayer will average about 500 at-bats a season. That means I played seven years without ever hitting the ball.”

Athletes know failure, and they embrace it.

You see, failure has a way fueling us (if we allow it) to come back stronger, to come back with a different game plan, to step up to the plate one more time. This process can happen countless times throughout a lifetime, and it is what fuels success.

So whatever your passion is, whatever your goal is, fail often; because failure is never, ever final. If your failing and still breathing you are still in the fight so DO NOT QUIT!!! Go back to your corner rethink your strategy, change your tactics, hone your skill set and come back like the ass-kicker you were born to be. You are all badass, unstoppable forces that can’t be denied! Can’t stop won’t stop! Go get it!!